runDisney loves to make every mile magic, and they add some fun entertainment and character photos ops on the their race courses.  The Princess Half Marathon has its share of amazing character photos ops,  a reason I keep wanting to go back.  As someone who has participated in this weekend the past fours, I can tell you some characters change, some remain the same.  In years past, Disney would publish a course entertainment poster which you could view in their booth at the expo, you can see the one from 2012 here – but alas, it was the least year I recall them going it.

I asked runDisney via social media to please publish this information again because with the races and character photo lines getting longer,  its helps a princess plan out her race photos must have stops.  You think with the new FastPass+ and Dining reservation systems they would be all about planning.  Alas, they reported back they liked to keep things magical and have some surprises in store. I respect their desire, so if you don’t want to know, SPOILER ALERT: I am telling you has been there last year based on my memory and other race recaps.

NOTE: NOT official runDisney List, Based on My Observations

Mickey and Minnie were again at the END of the race before you crossed the finish,but they would NOT let you stop for a photo.  The family reunion area is in the Parking Lot outside the official finish and I think they rotate the princesses, but the three above were spotted last year.

Characters in 2014 were different than years past.  If you want detail of those years and you missed it, I wrote about it here.

If you did the Glass Slipper challenge, there were some repeats from the 10k Course.  Oh no complaints, the Inaugural Enchanted 10k had some great characters out as well – here they are and the course from my Enchanted 10k Race Recap. 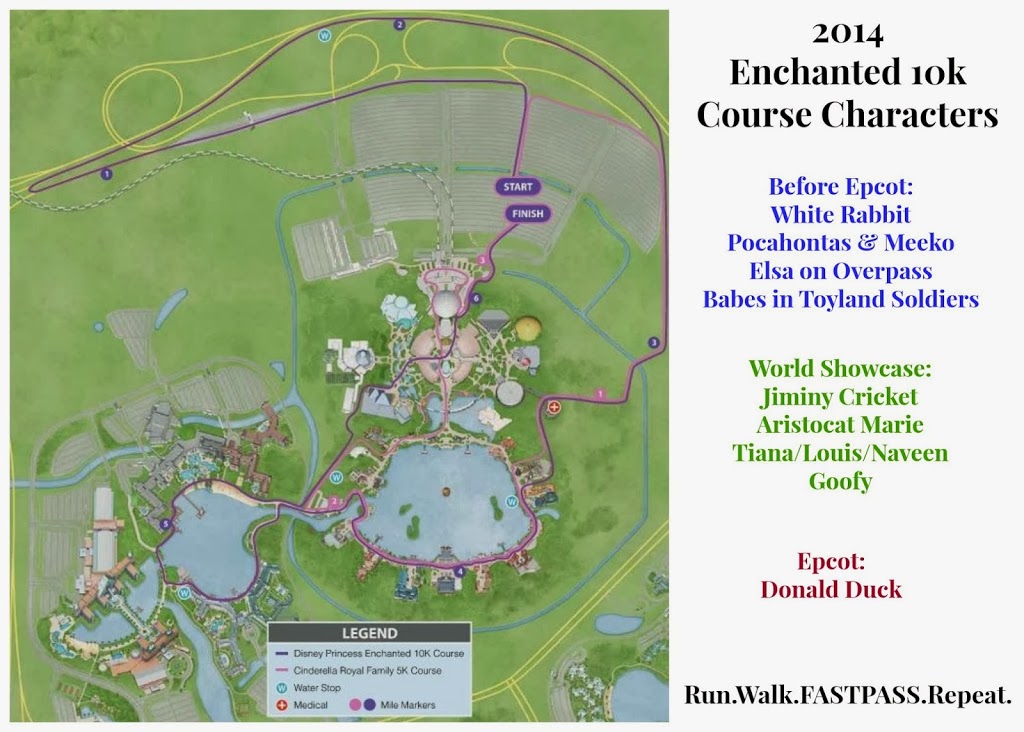 NOTE: Frozen’s Elsa was NOT available for Photo Op, she was up on an overpass…though it was snowing Disney Snow.

I did not run the 5k, but my BRF at My No Guilt Life did dressed as Gaston. Here’s her recap and you can see her photos and get an idea of the photo ops which were FAB!

HOW BAD ARE THE LINES?  The lines this year seemed longer to me…especially Royal Mickey and Minnie, The Villains, Pirates and Heroes.  If you want a photo with ALL the characters, you probably need to be faster than a 10minute mile is my opinion. This gives you about an hour and 20 minutes give or take for the lines for characters – of course the closer you are to the front, the more people behind you so the chance of lines being shorter is greater – hey its reality! Here’s an estimate of my wait times from a couple years ago.  And really no stress, candid photos as you run by are fun too….just be courteous to those around you.  A sudden stop can be dangerous to runners behind you. Really they give you plenty of characters.

You signing up for the 2015 Princess Half?  Open registration opens at noon EST Tuesday July 15th. I am signing up and figuring out how I can make it to my favorite race with girlfriends. You can check out my recaps, tips and videos on my runDisney page.

Who all is signing up this week for my favorite race?

Do you like taking Character Photos?  Who would you most love your race photo with?

Follow Me
Julie @RunWalkRepeat
Wife, Mom, Southerner, Former Cubicle Dweller, Sting Fanatic and Reluctant Runner. I got started on family a little later in life than most and run for my health. A fan of Food, Entertainment, Travel, Galloway Running and Disney, I like to find the fun in all things in life.

Follow Me
Latest posts by Julie @RunWalkRepeat (see all)

Wife, Mom, Southerner, Former Cubicle Dweller, Sting Fanatic and Reluctant Runner. I got started on family a little later in life than most and run for my health. A fan of Food, Entertainment, Travel, Galloway Running and Disney, I like to find the fun in all things in life.

Hey there, I am Julie a mid life former corporate cubicle dweller, now a work at home Travel Agent, wife, and mom of an angel in heaven and a tween daughter who is going on 21 it seems. A native of Atlanta GA, and lifestyle blogger sharing my loves....travel, music, entertainment, parenting AND what I am trying to love...getting fit. The struggle is real.
Julie @RunWalkRepeat.com